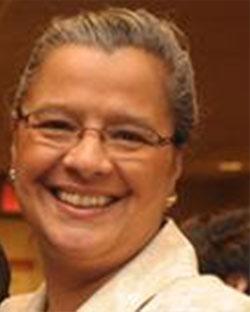 Bridget Gonzales is an accomplished professional in public affairs, public policy, and public administration and was selected to be the Chief, Office of Legislative, Education and Intergovernmental Affairs at the Minority Business Development Agency (MBDA) in October, 2005.  In this capacity, she provides day-to-day oversight and strategic guidance on communications, public affairs, congressional and intergovernmental affairs, research and policy.   During her tenure, Bridget has spearheaded greater visibility for the agency; increased congressional recognition of the Agency and overseen a complete rebranding of the Agency’s logos and collateral materials.

Prior to joining MBDA, Bridget was a Vice President with Edelman Public Relations, the world’s largest independent public relations firm, where she developed communications strategies and issue campaigns. During her tenure as an Assistant Vice President for Issue Dynamics, Inc., a consumer and public affairs firm in Washington, DC, Ms. Gonzales led the firm’s Strategic Alliances Group in support of Fortune 500 clients such as Verizon Communications, BellSouth, SBC Communications, Corning, Novartis, and others.  Ms. Gonzales was instrumental in planning and executing public affairs and consumer education campaigns and built effective working relationships with high profile national organizations such as the League of United Latin American Citizens, U.S. Hispanic Chamber of Commerce, NAACP, National Grange, Gray Panthers and others.

Ms. Gonzales’ first entry into federal service began as a budget analyst with the U.S. Environmental Protection Agency.  While there, she had primary responsibility for facilitating the federal budgeting process for the Office of the Administrator, Office of International Affairs and the Office of Policy, Planning and Evaluation.

Bridget started her career with Girl Scouts of the USA and held various positions in Detroit, New York City and San Diego from 1982-1988.  This is where she accumulated a solid foundation in membership marketing, volunteer management, event planning, strategic planning, non-profit administration, and adult training and development.

Ms. Gonzales holds a Masters in Public Administration from Baruch College - City University of New York, a Bachelor of Social Work from Marygrove College in Detroit, and she completed course work in political science as a PhD candidate at the University of Michigan.   She is an alumnus of the Hispanic Leadership Development Program of Detroit and the National Urban Fellows Program.