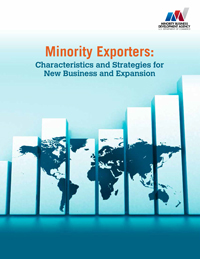 As of 2007, 28,531 minority business enterprises (MBEs) generated products and services valued at over $30 billion, representing 17.5 percent of all classifiable exporting businesses in the United States.2 This report, Minority Exporters: Characteristics and Strategies for New Business and Expansion, characterizes the nature of MBE exporters to understand the potential for the further growth of this group and whether lessons learned from this group can be applied to other small and medium-sized enterprises (SMEs). MBEs have a strong competitive advantage in international business transactions due to cultural affinities, multilingual skills, and close ties to countries of origin. Through a comprehensive literature review and the presentation of select case studies, this report surfaces many of the export characteristics of these firms, particularly the number of employees, levels of productivity, and share of receipts when compared to non-exporting MBEs.

The data presented in this report is based on the Ownership Characteristics of Classifiable U.S. Exporting Firms, 2007: Survey of Business Owners and A Profile of U.S. Importing and Exporting Companies, 2010-2011. The report concludes with four case studies of actual MBE exporters to the Obama Administration’s NEI NEXT target markets that summarize both best practices and challenges in exporting.3

According to the data, MBE exporters have more employees, higher productivity and their share of receipts from goods or services when compared to nonminority exporters. MBEs also have a comparative advantage relative to other nonminority-owned firms that allow them to conduct more business in the countries in which they have ties, as shown in the case of Asian- and Hispanic-owned firms. These cultural relationships have helped MBE exporters overcome numerous barriers to exporting, such as fixed costs that prevent most other firms from doing the same. Evidence from the case studies presented in this report supports this finding, and shows that, in the absence of such linkages, being entrepreneurially-oriented and engaging in proper export planning can also lead to viable business models.

MBEs benefitted from exporting when compared to nonminority-owned exporters in 2007.

Some MBE subgroups were higher exporters in 2007 when compared to others.

Information from the four case studies also suggests that U.S. Free Trade Agreements (FTAs) have greatly facilitated the entry of MBEs into global markets. Having both private and public partners and a reliable network of agents, distributors and other partners in foreign markets, the highlighted cases of MBE exporters have been able to promote sales and subsequent services. One of the additional lessons gleaned from this study is that tapping into smaller niche markets can be a key to business effectiveness for MBEs entering foreign markets with large distributors.

Increased support of MBE exporters is still essential to their growth in this area, and analyzing data about their characteristics will be useful to understanding exporting benefits. As the U.S. population trends toward a majority- minority, the share of MBE business ownership should parallel this growth, with exporting as one of many viable options available to these firms. In the end, leveraging the ability of MBEs to export benefits the nation through job and wealth creation that ultimately contribute to U.S. global competitiveness in existing and emerging industries.

2 Note that 2007 is the latest year for which U.S. Census data are available and are constructed as the base year for the Census data used in this report. See also U.S. Department of Commerce, U.S. Census Bureau, “Ownership Characteristics of Classifiable U.S. Exporting Firms: 2007.”