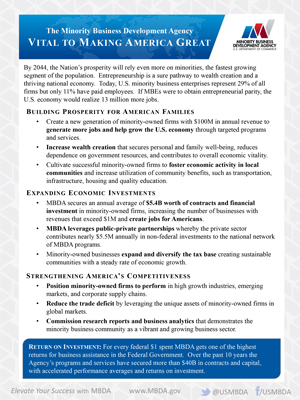 By 2044, the Nation’s prosperity will rely even more on minorities, the fastest growing segment of the population.  Entrepreneurship is a sure pathway to wealth creation and a thriving national economy.  Today, U.S. minority business enterprises represent 29% of all firms but only 11% have paid employees.  If MBEs were to obtain entrepreneurial parity, the U.S. economy would realize 13 million more jobs.

Return on Investment: For every federal $1 spent MBDA gets one of the highest returns for business assistance in the Federal Government.  Over the past 10 years the Agency’s programs and services have secured more than $40B in contracts and capital, with accelerated performance averages and returns on investment.

The only Federal Government agency solely dedicated to the growth and global competitiveness of minority business enterprise.